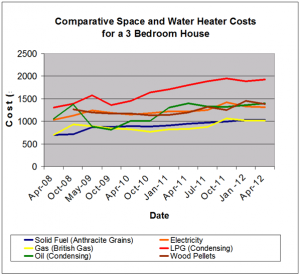 Additionally, there is now very little difference between the price of heating an average three-bedroom home with oil, electricity or wood pellets.

The results coincide with the announcement by the Department of Energy and Climate Change (DECC) that the number of fuel poor households in the UK fell to 4.75m in 2010, from 5.5m in 2009. The DECC report says that improvements in the energy efficiency of the housing stock and installations of energy efficient boilers (32% of households had condensing boilers in 2010 compared with 24% in 2009) enabled households to heat their home with less energy. There was also little change in prices for domestic energy between 2009 and 2010.

OFTEC director general Jeremy Hawksley said: “Oil is still one of the most competitive fuels for off gas main properties in rural areas, and it’s reassuring that the move towards condensing boilers has helped contribute to a reduction in fuel poverty.”

For an average three-bedroom house, it costs £1929 per annum to provide heating and hot water with LPG, while oil is 27% cheaper at £1408.